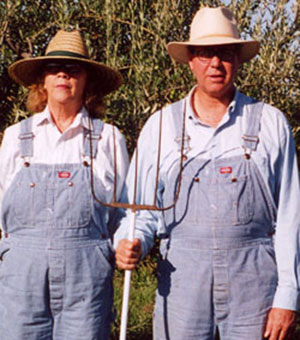 The ranch where our olives are grown, is nestled in the foothills of the northern Sierra Nevada and flourishes in the hot dry summers that characterize the growing fields of some of the best olive oil in the world. The soil is rich and red, the climate dry. Perfect for olive trees.

Early last century this was a citrus orchard. A catastrophic fire burned the trees and destroyed the ranch house, leaving only the barn. Soon several acres of Mission olive trees were planted. These trees are now about 90 years old.

In the 1970s Mr. Wm. Billings bought the property, ensconced himself there in a small home with gorgeous views of the Sacramento Valley and planted 30 acres in Manzanillos. He also put in a small stand of Barounis for tree pollination. Mr. Billings primarily sold his olives to the canneries to be processed into table olives.

In 2003, Norman Russell and Janet Benner purchased the property and called it Joëlle Ranch after their daughter. Neither had had any ag training or experience but the property was so beautiful they fell in love. With the help of surrounding growers and the excellent olive oil division at University of California at Davis, the new growers learned to produce world class extra virgin olive oil and became part of the extraordinary California olive oil community.

Joëlle Olive Oil is cold-pressed, extra virgin, and produced here in California. Each of the oils is pungent and hearty in flavor. Most people are only familiar with the tasteless olive oil off the grocery store shelf and are surprised at how delicious "100% real olive oil" tastes! 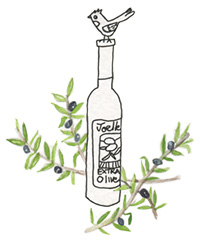 "We’ve spent much time in the south of France where one finds the worlds best olive oils. It turns out that your oils are in fact superior to any of the olive oils that we tried in Europe."